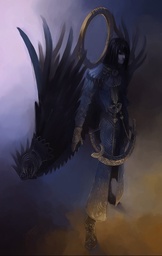 I began my journey into role playing with Advanced Dungeons & Dragons, 2nd edition. It was 1989, and I was 7 years old. Our DM had some left over modules from his older brother’s D&D collection. Just whatever he left behind when he left for college. We were fortunate enough to have copies of Keep on the Borderlands and Against the Giants, along with a few other crunchy bits. We devoured those classics, and a wide array of homemade dungeons within a year. After that our group had a keen interest in buying Forgotten Realms products, but I was much more interested in using what we had, namely the old I6 Module known as Ravenloft. I went to the nearest Dragon’s Den (a hobby store about an hour away) and picked up the Black Box set that had just come out. I successfully ran my first dozen or so adventures in the Dread Realms, but then we became homesick for Oerth. Mercifully the Mists coughed up my players and deposited them just South of the Nyr Dyv. After a brief encounter with the Rhenne folk, we were off on a classic high adventure. That campaign lasted for almost 4 years, ending in the Summer of 1994. Junior high school would put my gaming on hiatus for another 4 years, but I eagerly devoured D&D novels in the interim, mainly R.A. Salvatore’s action master pieces. I had some hit and miss adventures in the realms from 1998-2000, but as soon ad 3rd edition came out I was all over it. It’s adherence to the world of Greyhawk sold me instantly, and the Greyhawk Gazeteer for 3e was one of the first products I purchased. 3rd edition continues to be my favorite version of the game, but these days I’m playing retro-clones line Labyrinth Lord, Swords & Wizardy, and Lamentations of the Flame Princess. Catching up on an age of role playing I wasn’t alive to experience has put a lot of concepts of role playing, and from 3rd edition in particular, into perspective. Dungeons & Dragons is my favorite pastime, and I don’t expect any other hobby to take it’s place in my lifetime.

Greyhawk: Return to the Classic