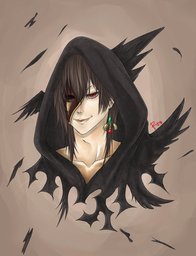 22 years old, Have been playing Tabletop games since I was 13. Began with World of Darkness in 2003. Stopped playing in ’04 when the group was split by the closing of the comic shop where we played.

Fast Forward to 2008, Began playing D&D 3.X with a highschool friend. Introduced back into WoD in late 2009, and began Exalted in early 2010. Began playing Dark Heresy in Mid 2010, and am now DMing Pathfinder, running a campaign in the Elder Scrolls Universe

I also run the Anime/Gaming convention circuit as a member of the ninjaHELL team. Please see our website www.ninjahell.blogspot.com for more details (We stay in Texas due to monetary constraints, unfortunately.) In ninjaHELL, I am Kogaku: The Commissar Ninja