CyberPunkGirl66 doesn't currently have any campaigns. 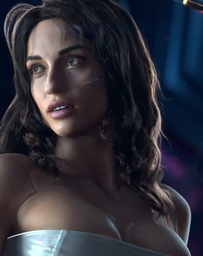 For me, it started with realizing my parents had something called a ColecoVision (Some of you remember those I’m sure). My favorite game on it was not a fighting game but a puzzle game called Ladybug. (I would love to be able to download this game on the Wii today!) I could often reach level 100 on the game. I had it mastered from an early age. (It’s not as easy to do on the computer)

Being in Elementary School, I realized I needed to get a Nintendo soon and so like many others, I grew up playing games like Super Mario Brothers and the Legend of Zelda. Link of the Zelda series was a hero of mine growing up. I still remember taking a Nintendo Power magazine to the place I’d get my hair cut. In it, I showed a picture of Link from Zelda II and said that I wanted my hair to look like that.

And before too long, people at my school knew who was the main expert on video games. While there are puzzle games and some adventure games I still enjoy, far and long the games I enjoy the most are RPGs. I prefer Final Fantasy, Dragon Quest, Kingdom Hearts, etc.