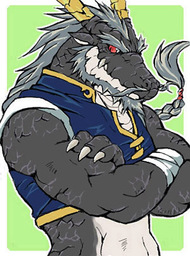 I’ve been roleplaying for the last 28 years, both as player and game master. If it’s ever been in print, I’ve probably played it. There isn’t any game I really won’t play, but I have a few favorites which are typically those that allow me to indulge my primary reason for roleplaying: Not being a human. Among them are Ironclaw/Jadeclaw, and occasionally, if anyone finds the rules to play it, Steelclaw (modern anthropomorphic roleplaying, never formally published, fan-adapated), Blue Planet v2.0, DnD4e, Werewolf: the Apocalypse (3rd Ed), Mage: the Ascension (2nd Ed), Justifiers, and a few more.

Things I don’t like playing: D&D 3.×. It’s broken. Severely, irredeemably broken. 4e is better, in almost every way. If you don’t like my opinion, that’s fine. It’s an opinion. I’m entitled to it. Just don’t try to convince me that your 1st level whatever with 6 attacks per round and a X4 crit with a threat range of 17-20 is legal. I know it’s legal. And that’s why the system is broken. I love overpowered things, but 3.x took that to a whole new level of bleh. Also, I probably won’t be asking to join your game, so my opinion won’t impact you in the slightest. Enjoy it if you like it.

Other games I don’t like: Changeling. Not a WoD-feeling game. Can’t get into it. Wraith. A little too disconnected from the other games to be “part of the world”. Yes, it has the feel, but if even werewolves can’t see your spirit, how are you going to interact?

Milk of the Golden Sun