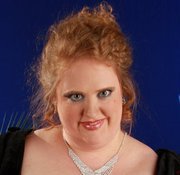 It wasn’t until I was out of college (1996) that I started playing tabletop RPGs. I cut my teeth on the Palladium system, then played some White Wolf, and didn’t really get into D&D until after 3.0 came out – though that was my first experience gaming with people I didn’t know except via the game.

In 2005 I encountered Living Greyhawk at a local convention. In 2006 an acquaintance from work invited me to a combat demonstration of the HERO gaming system, and later invited me to join a new campaign being run by one of his friends. It’s kind of sad to say that this was my first real success at making friends that were not mutual acquaintances of my husband, but it was a success, and those friendships led to my being invited to two of the four campaigns in which I’m playing now.

DarthKrzysztof updated the character Nasti in the campaign Gates
March 03, 2021 16:39