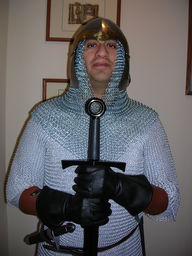 I’m currently running my homebrew “Vanished Lands” campaign setting (using the D20 retro-clone Basic Fantasy Role-Playing Game) for a face-to-face group that meets on alternating Monday nights about 10 miles west of Boston, Mass., and for a telecom group that meets on Sundays via Skype.

jroberts96 created the adventure log post The Colossus of Argos in the campaign Age of Conan
March 23, 2022 23:00