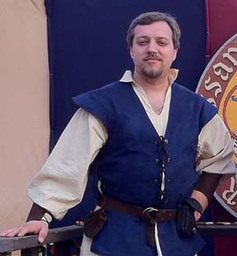 Was bitten by the RPG bug early on, thanks to a visiting older cousin and his boxed set of D&D books and lead miniatures. Later got into Steve Jackson & Ian Livingstones’ “Fighting Fantasy” books before finding out the neighborhood kids were playing D&D… Eventually became the long-time GM for (mostly) the same group of assorted crazy players, having run games in both the US and the UK, and generally loving every minute of it.

Avid lover of Sci-Fi and Fantasy – love to read, write, and watch. Some art background – useful for drawing maps, in particular! Enjoy traveling, history, sociology & folklore, and often find ways to integrate them into my games in some fashion or another.

The Fated and the Lost