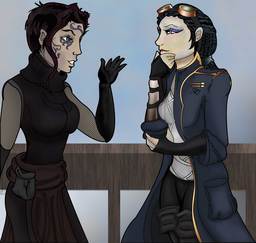 I was born and raised in Cincinnati, Ohio. I started gaming at my after-school program, D&D 3.5. My very first character was a half-elf druid. Even then, I loved drawing (or trying to draw) my character and fellow party-members’ characters interacting. I didn’t always have the best skills with a pencil. The skills I have came much later on.

I graduated from the of School for Creative and Performing Arts, majoring in Instrumental Performance with a minor in Music Theory and Composition. I thought I was going to make my way through the world as the next Danny Elfman or as first-chair floutist in some symphony orchestra somewhere, but I took a year off between high school and college and a year turned into five, and I let my musical skills rust.

In 2006, I started gaming again. This campaign began as a version 1.0/2.0 miss-mash and slowly got updated to 3.5. So yes, I have THAC0′ed with a DM that still has the original box set. Sadly, the original d20 is more like a sphere, now. Corners all broke off. It was with this campaign that I started drawing again and fell in love with the visual aspects of art.

I’m currently working as a freelance Graphic Designer, building a name for myself in the Gaming community at large working with gaming companies and authors. I’ve worked with Hans Cummings (you may recognize him from the Ennie Awards) on the World of Calliome Logo for his book series. I’ve also done a quick ad for Magpie Games and am hunting for advertising, artwork, and design commissions from players, GM’s, and game developers alike.

What I’ve Played: D&D 1.0-3.5, D20 Modern, Gaterunner, Space 1889, and Pathfinder. Never managed to find a group of Vampires, The Masquerade to join up with, though I read some of the books. Zelda, Crono-Trigger, Neverwinter Nights and Fable: the Lost Chapters are my favorite single-player role-playing games on the PC, X-Box, or SNES.