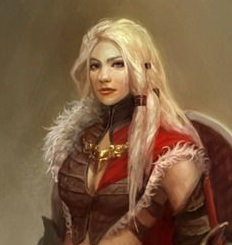 Jhessail is a criminal of a different kind, she carries with her a deep guilt that can be seen from time to time, and seeks redemption, possibly revenge, for a crime she “did not” commit. After being accused of this crime, her life was ruined and she became an outcast. Her only hope was in learning to live as she was accused.. a criminal. In the depths of the underworld she learned to fight and defend herself, until she was able to get work as a tavern peacekeeper & wench, and later with proved a capable asset in a few small crews, till she met Lysandis.

Quirks:: Jhessail has a particular taste for extravagant when seeking loot.. and it has been rumored that she can be found after jobs, seeking refuge in high end taverns disguised as a respectable lady of society in the effects acquired from her journeys.

She often smells of perfume, possibly from a regal bath soak, and sips cognac from the special reserve bar shelf..