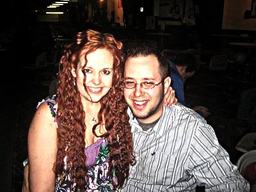 I was born in 1985. In 1996 I met a friend of the family who lived close by that was really into RPG’s. He talked up Palladium Books Rifts to me and one of my friends all the time. He let me borrow TMNT, and Heroes Unlimited Revised for a little while so I could see what it was like. My friend and I got really excited about playing as super heroes and began thinking up what would be fun characters to play.

Doug (family friend) asked us what we thought of the books and we told him we wanted to try it out. So he had us roll up our characters individually and we began playing. Within 2 games we got caught up in a Rift and ended up on Rifts Earth. This took place in 1997. Shortly after beginning my friend and I both moved away. This ended our game before it really got going.

Doug ended up giving me his TMNT book when I moved. I went and bought Heroes Unlimited Revised with what little money I had. Then a few months later my mom bought me Heroes Unlimited 2nd Edition and Villians Unlimited. I’d create characters and write stories using the characters I wrote but never found anyone who wanted to play a paper and dice game when they could play video games.

Then in 2009 while working in a bar as a bouncer I began talking to a girl I worked with. We began dating in early 2010 and found out she used to play Dungeons and Dragons 2nd edition with her 3 brothers, sister, and 2 of her friends regularly. This got me back into RPGs knowing I found someone I could game with.

My first group to GM for was born! My fiance, my sister, and brother in law began playing Heroes Unlimited. We also played D&D2e with my girlfriend GMing. This went on bi weekly for a couple of months. Real life stepped in and forced our games to end.

Early 2012 we were about to get the group playing again in a Heroes Unlimited Campaign. We made characters and were ready to play but once again real life stepped in. This time I made a point to find a way to play. I became a Megaversal Ambassador for Palladium Books and vowed to practice more before running games at conventions and other public places.

My fiance and I have run a duet game also known as a solo game before using Heroes Unlimited. I also have run chatroom based games over on the Palladium Books Chatrooms.

Really hope to grow this hobby for myself and improve both as a player and GM. GMing is really fun and I thrive on knowing I can tell a story that others will get into and really feel apart of.

Something else I look forward to is one day gaming with my family. It helps having a great girl who also likes RPG’s. Hoping our kids will enjoy to play them as well.

Guardians of the Frontier

GamingMegaverse updated the character Timmy in the campaign Damnation
June 13, 2022 07:00

GamingMegaverse updated the wiki page acknowledgements in the campaign A God...Rebuilt
June 07, 2022 01:21