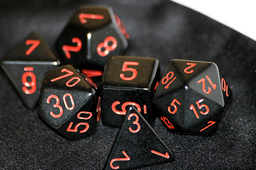 Been playing role playing games for over 25 years. A wide variety of RPG’s; all of the Dungeon and Dragon iterations, most of the Traveller , Gurps, Hero System versions, Villians and Vigilants, Battletech (both board and RPG), Chill, Torg, Cyberpunk, Shadowrun, Twilght 2000, Merc, Stormbringer, Golden Heroes, DC Heores, Cadillacs and Dinosaurs, Palladium, Warhammer Fantasy RPG, Aliens, Star Wars, Mutants and Masterminds etc etc etc. Have enjoyed Gming most of these and played in very few as a PC.
Apart from the gaming enjoy loads of reading, collecting comics, movies etc ( all to better support the games of course), into drawing, have eclectic tastes in music, DIY and computers in general.
2011
For this year we are takin it back to old school and trying Basic Fantasy as well as Stars without Number, based on Basic D&D and ODD rule sets respectively. See ya there!
2015 Hmmm how time flies! Been through several campaigns in the interim. Need to get back into the Portal.