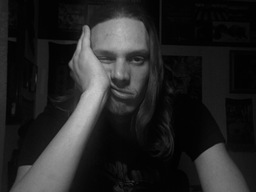 I could tell you all about myself, but I would rather rain down quotes that I feel inspired by:

“You ask me if I have a God Complex? Let me tell you something…I AM God.” -Alec Baldwin in “Malice”.

“Doesn’t matter what the press says. Doesn’t matter what the politicians or the mobs say. Doesn’t matter if the whole country decides that something wrong is something right. This nation was founded on one principle above all else: The requirement that we stand up for what we believe, no matter the odds or the consequences. When the mob and the press and the whole world tell you to move, it is your job is to plant yourself like a tree beside the River of Truth, and tell the whole world…No, YOU move!” -Capt. America

“I’m scared enough as it is” -Bill Campbell as “The Rocketeer” (If there is anything I want to hear come out of a heroes mouth, it is this quote. Why? Because it shows that even though he is scared to death, he will still do his damnedest to save a life)

“It wasn’t worth it.” -Tony Stark after the death of Capt. America in ‘Civil War’

Worker bees can leave. Even drones can fly away. The Queen is their slave. -Fight Club Haiku

“If we can’t make memories, we can’t heal” -Guy Pearce in “Memento”

“If I die tomorrow, I’d be alright because I believe that after we’re gone The Spirit Carries On” -Dream Theater

“Kiss While Your Lips Are Still Red While he`s still silent Rest while bosom is still untouched, unveiled Hold another hand while the hand`s still without a tool Drown into eyes while they`re still blind Love while the night still hides the withering dawn” -Nightwish

“Anything I’ve ever done that ultimately was worthwhile…initially scared me to death.” -Betty Bender