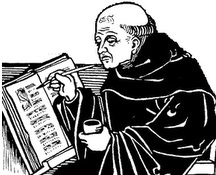 I’ve been gaming on and off since 1981 with SPI’s Dragonquest. During the 80’s I played numerous other RPG’s but usually came back home to Dragonquest. There have been major breaks from the game because of school work and life, but it still holds a place in my heart. I have recently returned to running a campaign after being away from the game for a few years. Our new group is a lot of fun and a bit different in make-up from previous groups.
Recently I started playing Dungeon World and really enjoy it! Blood Moon was a setting for Dragonquest that is now being revamped for play with the Dungeon World system.