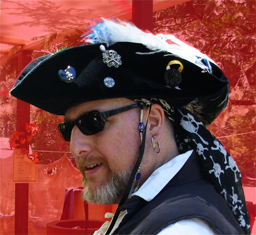 I have been playing a variation of Dungeons and Dragons since 1978. I have played many other games, in many genres. I prefer fantasy and prefer to create my own worlds, but also pay attention to the other options out there.

I am a fiction writer, working on several fantasy and science fiction stories. I am finding the OP/CS work to be cutting into my noveling, but what the heck… writing is writing.

Thanks for stopping by and checking me out.

FYI: Shimmering Kingdoms (FATE) is my main Campaign. Crimson Skies, with its side campaign (Crimson Sands) set in the same world, are no longer active campaigns. Sactown Blues is a FATE rpg modern urban fantasy set in Sacramento, CA, and is currently on hiatus. I am using most, but not all, of the world info from the Dresden Files RPG, but until I finalize things, I can’t really say it is a DFRPG game.

Down Bound Train was an idea I had for a Deadlands game. I did a video for it, but that is about as far as it went. Elan Vital is a private campaign site, the intent was for me to use OP to organize the fantasy world where a couple of my novels are set. Finally, the Saga of Steam and Shadow was for a RunePunk game that I got all excited about, but after I did all the work on it, my players decided that they did not want to play a second game, so the campaign sits here mostly “Under Construction”.

HumAnnoyd updated the adventure log post BLOOD ON THE STREETS 4 in the campaign THE EMERALD CITY
June 17, 2021 23:48

HumAnnoyd updated the adventure log post BLOOD ON THE STREETS 4 in the campaign THE EMERALD CITY
June 17, 2021 23:48

HumAnnoyd updated the adventure log post BLOOD ON THE STREETS 4 in the campaign THE EMERALD CITY
June 17, 2021 23:44

HumAnnoyd updated the adventure log post BLOOD ON THE STREETS 4 in the campaign THE EMERALD CITY
June 17, 2021 23:43

Kingcrowley updated the character Zeat in the campaign Moonage Daydreams & Other Grotesquerie
June 16, 2021 21:31