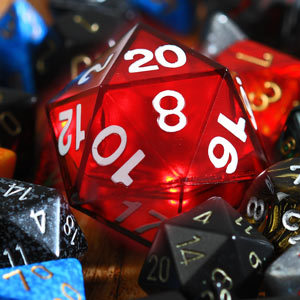 My experience with role-playing games began when I was in the 9th grade when one of my classmates asked if I wanted to give it a try. Unfortunately for them, I completely forgot about game day (but I had a fantastic time playing video games in the arcade with my best friend instead). They forgave me and one week later I played my first session of D&D with one friend and five strangers. These strangers became life-long friends. We would play D&D through high-school, during college breaks, and occasionally after. We seldom come together as a full group any more, but I have no doubt that many of the friendships will last until I am old and grey.

Due to real-life responsibilities, I stopped playing D&D around year 1995. Then in 2008, the gaming bug bit me and I began searching for a D&D group on penandpapergames.com. Not long after, I received a message from a new stranger, Rob. Apparently, there was this d20-based game called Pathfinder that was running a public beta. He had a GM and was looking for players. While it was not D&D by WOTC, many players were referring to it as D&D 3.75. Thus began a new 5-year journey into playing Pathfinder including a two-year campaign as a player, two years as a Pathfinder Society player, and one year as a Pathfinder Society GM; and now I am starting my own Pathfinder campaign.

As a techie, one of my goals would be to integrate RPG tech tools into my game. I have used MapTools, d20, Skype, and Teamspeak for online games, but I would really like to use MapTools and a projector for a home game. So far, we have stayed with battlemats and miniatures, but we shall see.

In my RPG life, I have played D&D, AD&D, D&D 3.0/3.5, Traveler, Ars Magica 4.0, Harnmaster, and Pathfinder. My love for RPGs (and one of my before-mentioned good friends) also lead to affection for board games such as Munchkin, Warhammer Quest, Descent: Journey in the Dark 2E, Zombies, Betrayal at House on the Hill, and other non-traditional board games.

Pathfinder Domcur By Under A Bleeding Sun

JackSpartan updated the character Harlin al Kleve in the campaign The Agisters of Asolade
April 03, 2018 01:44

JackSpartan updated the wiki page Home Page in the campaign The Agisters of Asolade
April 03, 2018 01:29