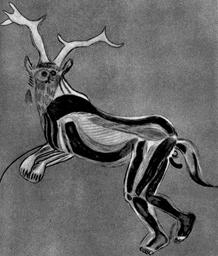 I just started putting (GURPS) setting material (Players Guide) on the wiki: Of Poets, Fools and Madmen, for potential players to review. I’m primarily using OP as a (re)source for players (rather than flooding them with text files) with a view toward table top play after Bealtainne (next May). If there’s sufficient interest I’ll consider running an online VTT campaign (using MapTools) in the setting as well. I’ve been GMing since the 80’s, first “In the Labyrinth,” Steve Jackson’s alpha prototype of what later became GURPS, and later Shadowrun, D&D 2nd (Forgotten Realms) and 3.5. in this setting. Various influences from these past games/settings are discernible. However, it seems that in a way returning to GURPS is like coming ‘round full circle in my gaming evolution with a much greater understanding of the role of storytelling in gaming and developing a setting which reflects that.

Wolvyn updated the character Calanon in the campaign The Evil Campaign
June 24, 2011 22:30

Wolvyn created a new item Breath of the Dragon in the campaign The Evil Campaign
June 18, 2011 02:25

Wolvyn updated the character beltz in the campaign The Evil Campaign
June 08, 2011 21:52