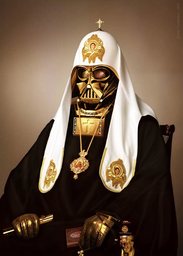 My name is Garren McKelvey and I’m a Dungeons and Dragons fanatic. Here’s a picture of me eating a grilled cheese sammich. I think there’s bacon in it too…isn’t bacon awesome? I live in New Orleans, LA and spend most of my time fixing computers.

I’ve been actively playing Dungeons and Dragons for 20 years and have been a Dungeon Master for just as long. Technically I’ve been playing for 27 years, but those first 7 years I just rolled the dice for my dad while he played D&D. I made my first character when I was 9. He was a 1st edition fighter named Mangus. I still use the Mangus name, but he’s not a fighter anymore. The name was too wizardy to keep as a fighter. My first adventure was Gary Gygax’s legendary campaign, The Temple of Elemental Evil

. I’ve since played Tomb of Horrors

, and many other classic adventures.

I DMed my first game when I was 9…maybe 10. I’m not really sure. I basically grabbed the book Dragons of Autumn Twilight

and used it as my script. It was a hot mess, but my dad was very patient with me, even when I killed his oldest character.

I moved on to 2nd edition by the time I was 12 and spent the next 10 years playing that. My D&D crew was much like most high school gaming groups. We got together at night and spent entire weekends dedicated to gaming. We ate WAY too much junk food and barely slept. There I honed my storytelling abilities and learned how to play to the audience. When 3rd edition came out I was in college and reluctantly switched over. Armor class going up?! MADNESS! But in the end it was a much needed change and while I never fully adapter 3.5 because I was too poor to repurchase the books I enjoyed this version as well.

Then came 4th edition. I know a lot of people don’t like 4th edition. Many say it detracts from the open ended style and creativity of the earlier editions. I’ve had people tell me when I say that I love 4th edition that I wouldn’t like it as much if I had played earlier editions. I usually smile at their ignorance. While I can understand how 4th edition has focused more on rules and regulations and less on letting the DM and players do whatever the hell they want, it also is much easier to remember and understand. I remember how hours of time was spent in 2nd and 3rd edition combing through the myriad of rule books trying to remember how to do some obscure thing, and God help you in 3rd edition if you wanted to grapple something.

I’ve been playing 4th edition since it hit the shelves. My main home campaign is a 4e homebrew I’ve been running for a couple years now. I’ve started expanding into Pathfinder and D&D Next playtests lately. I’m currently a player in three Pathfinder campaigns. I am currently running a 4e D&D game and a 1e D&D game. I’ve just begun a DMing a Pathfinder game.

KingMaker: Rise of the Dawn Lords