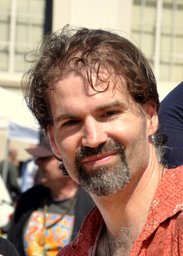 I believe that the goal of any game is to enjoy yourselves and have fun. If the game accomplishes this, then it is a success. I tend to focus on high adventure with a focus on the characters involvement in grand heroic events. I have been running games for 19 years on a fairly continual basis and run a regular gaming group every other week out of Berkeley currently. I have been running games at conventions for close to 9 years.

I enjoy Dungeons & Dragons, Shadowrun, 7th Sea, Legend of the 5 Rings, Rifts, Cyberpunk, and Whitewolf. I tend to focus on running d20 games involving Dungeons & Dragons, but incorporate such diverse elements as Rifts, Whitewolf, Arcana Evolved, and Bastion’s Oathbound elements. My games tend to be ones with a high amount of fantasy elements in them, but also sometimes branch into detective mystery and intrigue.

I joined Good Omens in 2008 and look forward to learning and sharing with other GMs to develope style and increase skills at running games.

Games I have run at recent DundraCon and Kublacon Conventions: