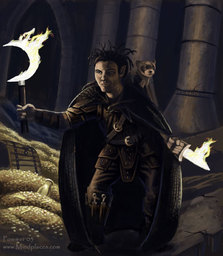 Otherwise known as the Demon of Dispersion, Choronzon is described by Crowley as a temporary personification of the raving and inconsistent forces that occupy the Abyss. In this system, Choronzon is given form in evocation only so it may be mastered.

Crowley states that he and Victor Benjamin Neuburg evoked Choronzon in the Sahara Desert in December 1909. In Crowley’s account, it is unclear whether Choronzon was invoked into an empty Solomonic triangle while Crowley sat elsewhere, or whether Crowley himself was the medium into which the demon was evoked. Nearly all writers except Lawrence Sutin take him to mean the latter. In the account, Choronzon is described as changing shape, which is read variously as an account of an actual metamorphosis, a subjective impression of Neuburg’s, or fabrication on Crowley’s part.

The account describes the demon throwing sand over the triangle to breach it, following which it attacked Neuburg ‘in the form of a naked savage’, forcing him to drive it back at the point of a dagger. Crowley’s account has been criticised as unreliable, as the relevant original pages are torn from the notebook in which the account was written. This, along with other inconsistencies in the manuscript, has led to speculation that Crowley embroidered the event to support his own belief system. Crowley himself claimed, in a footnote to the account in Liber 418, that “(t)he greatest precautions were taken at the time, and have since been yet further fortified, to keep silence concerning the rite of evocation.” Arthur Calder-Marshall, meanwhile, asserts in The Magic of my Youth that Neuburg gave a quite different account of the event, claiming that he and Crowley evoked the spirit of “a foreman builder from Ur of the Chaldees,” who chose to call himself “P.472”. The conversation begins when two British students ask Neuburg about a version of the story in which Crowley turned him into a zebra and sold him to a zoo. Neuburg’s response in this book contradicts both the words attributed to him in Liber 418 and the statement of Crowley biographer Lawrence Sutin.

Choronzon is deemed to be held in check by the power of the Goddess Babalon, inhabitant of Binah, the third Sephirah of the Tree of Life. Both Choronzon and the Abyss are discussed in Crowley’s Confessions (ch. 66):

“The name of the Dweller in the Abyss is Choronzon, but he is not really an individual. The Abyss is empty of being; it is filled with all possible forms, each equally inane, each therefore evil in the only true sense of the word—that is, meaningless but malignant, in so far as it craves to become real. These forms swirl senselessly into haphazard heaps like dust devils, and each such chance aggregation asserts itself to be an individual and shrieks, “I am I!” though aware all the time that its elements have no true bond; so that the slightest disturbance dissipates the delusion just as a horseman, meeting a dust devil, brings it in showers of sand to the earth."

So You Want to Be a Hero?