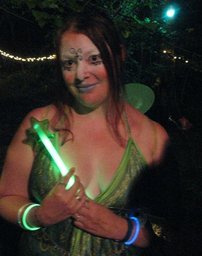 Hmmm…what to say about myself on a gaming site…?

I have been playing some form of RPG since I started college – back in 1996. I had one gaming experience before that, when I was about 11 or 12. My step-brother’s father was DMing for my siblings and myself. I had a character named Zelda. I don’t remember what he was, but I know that we left off that game in a very bad situation – a group of first-level characters trapped in a cellar with a very powerful, very evil wizard. Gulp.

I have played a variety of character classes – rogues, rangers, wizards, bards, a witch, and a warrior character in a short-lived campaign. I have played a kender, several elves, humans and spent a very brief time as a dwarf.

The longest two campaigns I participated in ran for a year or more – at one point, they were running simultaneously, with the DMs taking turns running their campaigns. It was supremely awesome and I miss it.

I am looking forward to playing!!! :D