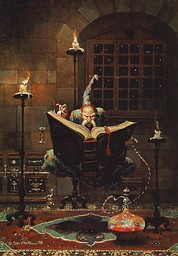 Among the most valuable lessons I’ve learned throughout my life is that the wisdom gained from empathy is far-and-away the most significant; to stand in the shoes of another and see the world through their eyes is truly a gift for both. Many wish to stand in the shoes of the wealthy and/or powerful, but in so doing, are they seeking to take their shoes to simply stand in their place, and if so, have they learned anything of real value? An experience gained, is lost when nothing comes of it; to find yourself surrendering to the hedonism, antipathy, etc. of another’s perspective is itself a forfeiture of who you are as an individual, and an escape from the questions that plague you…the grass isn’t any greener on the other side, you’ll still find yourself entangled in the briars so long as the fence remains!

I was raised in the Mid-West, an area many refer to as the Bible-Belt; as a teenager, long before the Platonic dice were within my hand, I heard ill of the emerging game Dungeons & Dragons® but this portent ebbed and returned with the tide of inspirational fancy drawn from folklore and myth…thankfully, literature wasn’t withheld from me and was itself a font of insight and creativity too. The ethos of my youth endured, along with my curiosity and empathy for the human condition; I recognized the parallels and understood that none knew fully, the truth of what it means to be human. I see our human-complexities echoed within the religious-strife being repeated even today, recalling the solemnity in the parable of Cain and Abel; as I realize the question of literal versus figurative interpretation only serves to obscure the labor we currently face!

There are many that consider role-playing games to be an exercise in escape, if that is the case, then perhaps we should burn books too; as for me, my favorite literary-character is Scout from “To Kill a Mockingbird”…to see the world through the eyes of an impressionable child again and grow with her when she realizes people aren’t the paper-cutouts of rumor and derision, is an illuminating experience to relive. I’ve discovered role-playing games to be an effective vehicle, to exercise the very-human inquiries previously expressed. Around the table, I’ve seen this exercise time-and-again, even where others were unaware of their own motivations; the vehicle is older than a young girl’s tea-set, or as new, as we choose to make it!

CAD
“Intelligence arrives with the correct answer but Wisdom comes when asking the right question.” ©

Rage Of The Norsemen