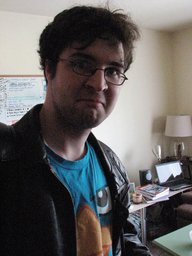 Playing fantasy role playing games has been my top hobby for many years. It mostly started back in elementary school where I would walk with my best friend around the playground pretending to be Star Wars characters and creating the stories on the fly. Later, I would buy my first box set and play Advanced Dungeons and Dragons in middle school. A bully actually stoped picking on me and joined me for a game during that time, and I loved how I could bring people together at a table to work together. I was poor however, so any game I ran had to be made up. Many years later I have note books and binders full of worlds and characters, each one created with a game in mind.

The Gifted game is a project I started in high school with my friends. Several of us created characters, complete with names and descriptions, and then we all wrote stories about them. None of our stories were related beyond sharing characters, but each person gave a great deal of input when it came to what their character did. At that time, my story was about what happened long after, “Investigations of the End,” but several stories I was writing on the side at the time ended up merging with the group project not long after and were all about what happened before and during Investigations. Over time, I would work on this project with many other people, and each time it would grow. Eventually I convinced my gaming group to play in this world I created and so far they love it.

tjwheeler9008 updated the character Mordesh Lurånd in the campaign Edge Of The Empire: All That Glitters
May 21, 2017 19:33

tjwheeler9008 updated the character Mordesh Lurånd in the campaign Edge Of The Empire: All That Glitters
May 14, 2017 08:24

Sasuthelovelycat updated the character Aiden Dayanir in the campaign Edge Of The Empire: All That Glitters
April 27, 2017 04:19

Sasuthelovelycat updated the character Aiden in the campaign Edge Of The Empire: All That Glitters
April 17, 2017 22:08