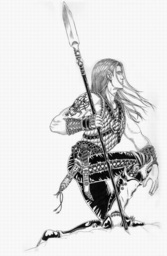 I have been running games fairly consistently since 1989. The vast majority of my repertoire has been the White-Wolf game systems (Vampire, Werewolf, Mage, Changeling) and naturally the various incarnations of Dungeons & Dragons (Original Rules, Advanced Rules aka 1E, 2E, 3E, 3.5E & 4E). In the last few years I gave up on D&D 4E as too restrictive and have been utilizing the Pathfinder rules set instead and have been very happy with it. Other game systems I have run are Ars Magica, Mutants & Masterminds, Amber Diceless role-playing, Palladium, Aberrant and Aeon.

I tend to run long-term campaigns that last on average 1-2 years. I hold games every week and very rarely have to cancel. My game sessions are typically 6 hours long each; so an average campaign will have 400+ hours of gameplay. My gaming philosophy is that of cooperative storytelling. I see role-playing as much like acting and the player character is the star of the play. I try to encourage immersive role-playing whenever I can.