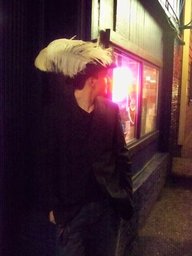 Games, more or less in order, that I have played or DMed since I started gaming a few years ago. This is not complete, as I am ignoring campaigns that did not last.

My first DnD character, he was a Halfling rogue. A young woodsman-turned-circus performer, he carried a strange dark ring given to him by his master, and generally had an interesting joke for the party.

His most memorable moment: A dungeon room with a dry well in the center. There were two basic kinds of enemies, one that pushed me and one that poisoned me. In the same encounter I was poisoned, pushed into the well (taking fall damage) and then climbed out. Finally passing out at the bottom of the well on my last healing surge, I weakly called for help from the bottom of the well, and the party very nearly left me.

A Dwarven fighter/cleric, Gregore was the epitome of Dwarven badassery. Between high high stats and his healing spells, there wasn’t a lot that could kill him.

His most memorable moment: a library full of deadly spiders. Gregore ran through the room, picking up the books we sought and taking a beating from the spiders. Eventually the poison of their bites began to add up, and as they covered him, he ran out, to a nearby acid trap. The impromptu acid bath killed the spiders, and a few healing spells restored me to full health.

My first attempt DMing, I created a large island with two cities, 5 dungeons, a dragon, an overarching plotline and dozens of side quests. I had npc dialogue prepared for each npc for at least 3 common questions, word for word. I went WAY overboard, in short.

The most memorable moment: A cavern elevator, where monsters attacked while half the party was lowering the other half down the underground cliffside. Immediately they chose to drop the crank, causing the elevator to smash through the landing platform and then splash into the river below. While the first group fought the Kruthik beasts that had swarmed them above, the second half, which included both Paladins, fought off a cave-dwelling crocodile that was attempting to devour their elevator. The force of his attacks and the river current eventually caused the rigging above to tear off, pushing 3 Kruthik and one party member over the edge to join the fight below.

A Shadow of a Doubt

My second real campaign as a DM, this was a rules-light investigative horror game set in 1942 Germany that ran for several months before most of the players graduated and moved away. It was a lot of fun!

My third campaign as a DM, this was a classic fantasy RPG with my girlfriend and roommates, and ran for about a year using the Dungeon World system. It was pretty brilliant.

A Shadow of Doubt

Tallyrand created the new campaign Shadowrun - Welcome to the Streets in the campaign Neon Dreams
October 01, 2019 03:46

NinjaSpank updated the character Grotok, the Mean in the campaign Land of Blackhaven / Barovian Nights
October 25, 2018 19:21