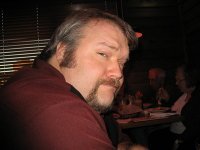 I started gaming in 1977. I was dragged to a home of an acquaintance of my parents. I was sent to go play with the other kids who were in their room. I walked in on two boys crouched over a map. The map had squares drawn on it. They were using wooden blocks for walls and they had lead miniatures in various stages of paint jobs.

They invited me to play and within seconds I was a human in a tavern. One of the boys was the Dungeon master telling everyone else what we saw. As in all early adventures there was a dungeon below the tavern. We ventured forth to kill monsters and loot the gold.

When I asked what we did next they said, “Go back upstairs, sell out stuff then go back down.” All and all it seemed pretty simple. However simple, I was hooked. I spent all that summer thinking about it. And later that year when my parents went to Salt Lake City on vacation I found the box. It was a 12”x9” and had this red dragon sitting on a pile of gold. The Dungeons & Dragons (Holmes Edition) was the door that opened to a life changing hobby.

Since then I’ve played a good chunk of the role playing games out there. Like many of you I even own systems I’ve never had a chance to play. My appetite for role playing spilled out into other books. If I could use a book to better understand a character or get ideas for stories, I purchased it. As a result I have books ranging from Communism to Torture Devices to Herbal Medicinal Field guides.

I’ve poured over Max Brooks “Zombie Survival Guide” thinking of ways to adapt it to the post apocalyptic game. I’ve read countless cultural books to get the perfect mannerisms for my characters. I’ve even gone as far as downloading slang terms so I could annoy the other players with over the top speech patterns.

I’m a ROLE player not a ROLL player. I prefer substance to action. I’ve been told I both raise the bar and intimidate others with my “in characterness.” Yes, I was a theater nerd as well.

Much to my wife’s chagrin I am a game-a-hollic. I love to play and love to talk about it. Yes I DO talk about other things…. occasionally. Like football.. as it relates to BloodBowl. Did I mention I love my wife dearly and am super grateful that she puts up with all of this?