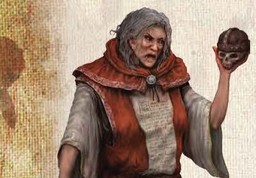 Hello,
I’m a long time gamer. I started in the early 80’s playing Classic D&D before playing AD&D 1st Ed.; although, I didn’t play AD&D long, I prefered D&D (Bargle must Die! If you don’t know what I mean by that, then you are either younger then 35, or had a childhood filled with more girls then mine was). In high school, I switched to The Fantasy Trip, which quickly morphed into GURPS (3rd Ed., I don’t speak 4th and doubt I will ever try it). During my college years, I mostly played GURPS and D&D – Cyclopedia Rules. I played Vampire for a while, but I got better and stopped. I never tried Collectible Card Games like Magic: the Gathering. I saw them for what they were, crack for gamers. A few years after college, I finally ponied up the bucks for AD&D 2nd ed. and ran a long running Birthright campaign that I have fond memories of to this day.

Since those days, I’ve discovered other games that I like a good bit: Tunnels & Trolls (5th Ed., not apposed to 7th Ed., just haven’t played it), Star Trek (Last Unicorn Games), and then discovered my favorite of all time, Warhammer Fantasy Roleplay. I started with 1st edition, moved on to 2nd, and now 3rd edition.

These days, I play mostly board games. Twilight Imperium, any version of Catan, but Starfarers of Catan is my stand-by, Smallworld, Ticket to Ride and Zombies! are my current favorites. When I play RPG’s, I mostly GM. Usually I run WFRP, although I still occasionally run T&T, Classic D&D and D&D 3.0 (I never saw the need to switch to 3.5, and 4.0 doesn’t look a bit interesting to me). I own Pathfinder and think it might be fun.

In my 25+ years of gaming, I’ve played a lot of various systems: Shadowrun, Gamma World, Boot Hill, Gangbusters, Runequest, Palidium Fantasy and 7th Sea; however, the systems I’ve written about previously are my favorites.

Recently, I’ve developed an interest in Fudge (Free form Do it yourself Gaming Engine, not the fudge with nuts you have at Christmas time). I really like the simplicity of the system and the flexibility allowed. I’m not sure what I’m going to do about this new found fascination as of yet. There are other roleplaying games that I own aside from Fudge, that I like the looks of, have never played, but hope to before I die: GURPS “Traveller”, GURPS “WWII” (in both cases, I’m not sure I’d use GURPS as the engine, I just might use Fudge), Pendragon looks amazing and Ars Magicka is very well done.

10/31/12
I have had a too long break from RPG’s, space filled with much board gaming (Elder Sign, Arkham Horror, Mansions of Madness, Chaos in the Old World, Ticket to Ride and Smallworld are my recent favorites). Soon, I will be playing and GMing (round robin style) in a WFRP 3rd edition game. We could take on one, two or possibly three more players. Write if interested.

The Paths of the Damned

Andrew_Hart created a new character Adara in the campaign Ghosts of Saltmarsh
December 17, 2019 00:41