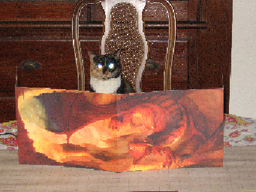 I have lived and died many times since the pretty red box lured me to adventure in 1979. I enjoy the full spectrum of genres from fantasy to sci-fi and everything in between. I was a playtester for an RPG once and currently beta testing a campaign management program which I love to death.

My favorite set of rules to use for a spontaneous game is the Swords and Wizardry 0e rules. I find them very fast-paced and easy for new players to grasp quickly. (http://www.swordsandwizardry.com/).

I stopped playing 4th edition D&D. I did enjoy the campaign being run. The story was intriguing and I was always anxious to see where it would lead us next. I do not enjoy the combat mechanics.

I’m involved in a bi-weekly-ish game of AD&D that I am enjoying. We’ve had a few TPKs, but I think our new band of stalwart adventurers have more of a level head (We haven’t run screaming from anything and still end up dying (1st party), nor have we tried to kill everything in sight (2nd party). I believe they say ’the thrid time is the charm?

We will be trying The One Ring later on this year. I’m excited about the rules set and setting! It looks promising through the first brief read.