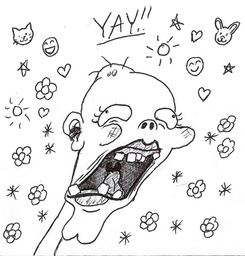 I’m a newbie GM aspiring to non-suckage. I’ve played various systems throughout my life: D&D (2.0 – 4.0), Star Wars d20, Shadowrun (3e & 4e), Marvel Universe, Mage: the Ascension, Kobolds Ate My Baby, and I’m sure there are a few more games I’m forgetting! I’ve always had stories swimming around in my head, and have always wanted to commit them to running a game… SO I BECAME A GM!

So far, game-mastering has been a challenge, but rewarding. I do my best to hone my skills, and to ensure that my players have fun. I’ve had quite a few hiccups along the way, and it’s been a learning experience. My current group for No Tomorrow has been amazingly patient with me; thank you all!

I write my own stories and create my own maps. I use Photoshop to design my own maps, one of which may be found here. I create maps for anyone on request, provided I get at least a week’s advance notice for a medium-sized map. Unfortunately, I cannot create a fully-detailed world map with a thousand locations within a week… I’ll need a significant amount of time for that ;)

If you are interested, please send me a private message!

I am also available for art commissions. You can view my gallery and pricing info at my DeviantArt page. I will not post my prices here.

I learned about the GM badges from Joshua’s Dark Heritage blog, and thought they’d be neat to add here. Each of these badges represent my ideal play style (at least, that which I aspire to). From left to right:

1: My game will tell an interesting story. I cannot tolerate meaningless, random encounters, and the directionless, episodic “adventure of the week” with no grand story arc is not my cup of tea.
2: Characters in my games are destined for greatness, not random death. I’ve heard many a horror story about “GM vs. Player”, in which the GM endeavors to grind the PC’s into paste using absurd traps and overwhelming enemies at every turn. Gaming, to me, has always been about friends getting together to tell an awesome and fun story – together. The “Me vs. Them” approach does not appeal to me in games. This doesn’t mean I will withhold difficult challenges, this means I won’t ever run the ridiculous “ROCKS FALL, EVERYONE DIES”. Unless it’s a beer & pretzels game. Also, see #8…
3: My games focus on interesting characters and drama. I do my best to create a rich, living world, and the characters that my players create are also a part of that world. My players are the stars, and their actions will uplift or condemn nations.
4: My game focuses on espionage and politics. Intrigue is my drug in gaming. I prefer an adventure where the politics are likelier to kill than the monster-of-the-week. The scheming rakshasa, manipulative thieves’ guilds, backstabbing intelligence agencies, devilish secret societies, the fate-twisting games of wizards, all of these things are far deadlier than a thug with a gun. Brr, I just got a chill up my spine… :3
5: My games focuses on exploration & mystery. I enjoy heaping mounds of secrets into my games, and each one the players uncover may be a weapon or deadly downfall. I like to treat secrets as indulgent rewards… an intel trade between spies and the treasure chest hidden away in a secret room will always be more rewarding, more powerful than that which is easily-gained.
6: My games include disturbing content. Though not consistently true, my games will sometimes feature situations which are disturbing, but not so much that they shift the genre into horror. I go for elements that cause deep-seated dread rather than repulsive gore… though sometimes gore is also fun, in doses.
7: I will mirror back player ideas I think are interesting in the game. Sometimes my players will mouth off with “I’M GLAD XYZ DIDN’T HAPPEN!!”. Beware… I take notes and just might add those nifty ideas back into the game >:3
8: Players in my game should be prepared to run when the odds are against them. It’s not wrong to run, and sometimes running from the big badass is the right thing to do. Stopping every bad guy that pops his head up is not always possible. Regrouping to create future plans may be necessary… unless one desires a very short game.
9: The GM is in charge in my games and “rule-zero” is in effect. I do not mind a very brief discussion on the rules, but if it becomes an argument that lasts more than a few minutes, I deliver the final ruling, and further discussion waits until the end of the session. I don’t like a good story getting bogged down by rules arguments, and my players don’t like it either!

DarthKrzysztof updated the character Nasti in the campaign Gates
May 10, 2021 02:32

DarthKrzysztof updated the character Nasti in the campaign Gates
May 04, 2021 15:25

DarthKrzysztof updated the character Nasti in the campaign Gates
April 30, 2021 02:08

DarthKrzysztof updated the character Naryalla in the campaign Gates
April 29, 2021 03:37

DarthKrzysztof updated the character Nasti in the campaign Gates
April 29, 2021 03:20

DarthKrzysztof updated the character Nasti in the campaign Gates
April 12, 2021 20:00

DarthKrzysztof updated the character Nasti in the campaign Gates
April 06, 2021 16:36