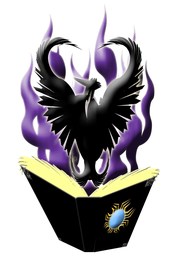 Here is an excerpt from my upcoming book Nightblade. Enjoy!

In a dark corner of the tavern, the silhouetted figure of a man could be seen sitting alone at a table. Shrouded in darkness, he seemed more a shadow than a man, save for the glint of moonlight reflecting off his medallion through the window.

Though no larger than an average man, he gave off an aura of great power and strength. He was dressed in black and had the hood of his cloak pulled down low so only the stubble on his chin could be seen when he tipped his head for a drink. No one dared approach him except for the occasional waitress who was ‘persuaded’ by the owner to do her job and wait on the mysterious patron.

“A-a-anything else f-for you, s-s-sir?” stammered the trembling waitress, wishing sincerely that she had not come to work that night. The stranger terrified her, even though he hadn’t spoken so much as a word to her all night. She felt that if he so much as looked her in the eyes that her heart would stop dead.

“No. That will be all, thank you,” He replied as he tossed a gold coin on the table. His voice seemed to carry a faint Elven accent, but he was too tall to be an elf, even a Gold. The elvish melody of his voice instantly calmed her fears but in its place brought forth curiosity. She wondered who this stranger was and why he was here so far away from the Elven city of Moonstar. Finding that her fear had taken leave, for the time being at least, she was able to speak more clearly to the shrouded man.

“I’m afraid I don’t have change for this.”

“Now see here! I’ll have you know that I’m not one of those kinds of girls! You need to go up the street for that—”

“Use the rest to get yourself as far away from here as possible,” the stranger said, ignoring her mistaken assumption that the generous tip was prepayment for services rendered in the bedroom of a harlot. “This city will be a war zone in a matter of days.”

“Just take it and go. Quickly. “You don’t want to be here when the drow make their way into this city.”

“The drow? Here? That’s impossible. Who are you, anyway?” she insisted, losing all inhibition as she reached out and grabbed his hand on the table.

“Nobody. Just a ghost of a man and a shadow of a dream,” He said as he gently took her hand off of his and traced a short but intricate pattern into the air before her eyes. As the waitress began to shake daze from her head, the man stood up and walked toward the door. Even as the doors swung shut behind him, the waitress was already beginning to wonder if she had truly been serving anyone, or if she had only imagined it.

“Ms. Beth,” she called, as she walked over to the woman behind the bar that owned the tavern, “I think I need to go home early tonight. I’m not feeling so well all of a sudden.”

“That shadowy man didn’t do anything to you did he?” Beth asked, concerned that her best waitress may be suffering the ill effects of a rogue spell caster. She had seen the brief contact between the two and feared for what he may have done to her. She new little of magic, and as a rule didn’t trust those who used it.

“Jennie, are you alright?”

“What?” The waitress asked, still fighting the effects of a sudden daze.

“I said ‘are you alright?’ I’m concerned that man did something to you back there before he left,” she repeated, gesturing to the table he had been sitting at only moments before.

“Man? What man?” There hasn’t been anyone at that table all night. Are you feeling alright, Ms. Beth?”

“I’m fine, Jennie. But I’m concerned for you. Why don’t you take the rest of the night off and go enjoy yourself.”

“Are you sure? I don’t mind staying.”

“I’m sure. It’s slow tonight. I can shut the place down. Go on. Enjoy that tip you earned,” she said, gesturing to the gold coin glinting in Jennie’s hand.

“Um, okay,” she said staring at the coin as though she hadn’t seen it before this very moment.

The look on the girls face as she stared at the coin furthered Beth’s concern for the girl, but she decided not to press the issue and waved goodbye as Jennie took off her apron and passed through the doors into the cool night air. She wondered briefly who the stranger was that had visited them tonight, but pushed the thoughts out of her head as she realized a few of the men at the bar were shouting for more drinks. As for the man in black, he had again disappeared into the shadows of the night, just as he had since the day he emerged from the Cave of Shadows nearly a year ago.