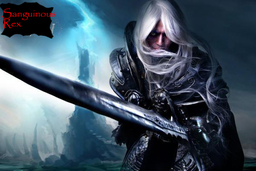 My name is Sanguinous Rex, Dread Lord of Pax [aka Pax Gaming]. I have been an avid MMORPG player for well over a decade. Before that (in high school & college) I played tabletop games like Dungeons & Dragons, Star Wars, etc. but always found myself in the role of Dungeon Master/Game Master.

After an almost decade-long tabletop RPG drought I joined a serious 4th Edition D&D campaign. I was finally playing a character as opposed to being the Dungeon Master which was awesome. But a side effect of playing D&D was that it began to whet my appetite to DM again.

The D&D game stopped due to DM burn out (an easy thing to happen in 4th Edition, trust me. 3+ hour battles can really get under your skin). After that I launched my OWN game of Dungeons & Dragons. This was during the Gary Gygax Memorial Fund Drive and the relaunch of 1st Edition D&D so I decided to run the game under 1st Edition rules!

I know there is a BIG divide between players (and even designers) who love/hate 1st edition, for a whole gamut of reasons including THAC0. But let me tell you, I love me some THAC0. Love it, love it, love it. Nothing comes more natural to my brain then THAC0 – I can explain THAC0 in my sleep.

The campaign was an online game and lasted for 3 months, one session a week. Two long missions were completed and my game world was being fleshed out but the players just weren’t feeling 1st Edition like I was and the game came to a halt after the 2nd mission. The players went off to play Pathfinder and my world building came to a screeching halt.

My tabletop crew has gotten back together again. Our Dungeon Master is back from burnout and decided to run a Pathfinder campaign. Everyone seems to like D&D 3.75. We just started playing again and so far it has been a blast (as a Level 1 Sorcerer I don’t have too much I can do but I DID drop a Dolphin on someone’s head).

We’re doing Pathfinder every other week. The week we aren’t playing Pathfinder we’re playing the D&D Adventure Game System. We just started that as well and are currently on the first box set, Castle Ravenloft. The system uses D&D 4th Edition rules (stripped down) but guess what? They work in a tabletop board game format!

During this time period, I have returned to my world building. This time, I will be designing the game with 5th Edition “DND Next” in mind. I can’t wait for 5th Edition to come out next year!

Star Wars: Edge of the Empire

Tanarus updated the wiki page Swamp of Khal'tur in the campaign Trail of the Broken Spear
January 14, 2022 18:12