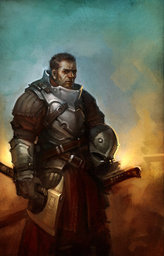 Tesh is a young Dalesman who got into trouble in Scardale. He was a resistance fighter against the Sembians, and spent about 3 months with a small group of other fighters, conducting guerilla warfare against the Sembian supply lines and trade routes into his Dale. Late last winter he found himself in town, pursued by a bunch of young soldiers who recognized his face from a wanted poster. He managed to kill 2 of the young solders before the rest fled, but as he looked into the dead eyes of the young men, he felt extreme guilt and regret. Those young men were no different than him, he realized, and had no business dying over the greed of the Sembians.

He decided that there was little he could do as a small-time resistance fighter, especially if he had lost his nerve to fight other men. He had heard about the war in Aglarond against the Thayans and the undead armies, and decided that his skills would best be honed there, where there was no moral ambiguity over the conflict.

He got as far as Uthmere before he found some work worth doing.