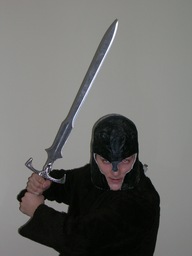 He was born in Impiltur, has 2 big brothers and 5 younger sisters. His father was a pirate and he learned sailing at a very young age. after a rough childhood when he was 12 things became more dire in Impiltur and they had to run to Ulruar, Silverymmoon city. they have settled there and started to live a poor but honest life, untill the age of 17.
One day one of the neighbours house caught fire and Sturm rushed in and saved the old lady and 2 grand children. He suddenly became famous in Aglarond and this glory filled him with a new purpose and life. He decided to be a guardian for travelers.
for 5 years he lived on the road, providing safe travels for magic users, clerics or merchants. For his luck there was never a big fight, although he was wearing scary armor and skulls all over the place, he hardly would beat 2 bandits. But the apperance did more than what fists would have. Untill that day.
It was getting dark and they were late, they had to make several detours because of scattered bandit parties along the way There were never so many bandits before, so they had to took a path to the forest, and all of a sudden they were attacked by Trolls. That was a bloody fight, they both did what they can and killed 2 of them and scared off the other. altough the consequences were dire.
Sturm was hit by his head and could hardly see anything through that stream of blood coming through the woumd. The cleric of helm he was guarding was in worse shape, a huge Troll sword was burried into his stomach.
Sturm went near him to help but it was too late, noone would survive a wound like that. He raised his sword to finish his suffering but the cleric hold his hand. His words was impossible to understand, his mouth was filled with blood. He reached to his pocket and retrieved a potion. Sturm said “I would not let you suicide, you will have the honor of death.” and grabbed the potion and throw it away. He saw the panic in the eyes of the cleric and said: “Dont worry my friend, soon it will be over and you will be relieved.” Cleric hold his hand again and raised his holy Symbol. Again he was trying to say something but Sturm was so tired and lost so much blood, his heart was banging on his ears. He tried to clear his mind and think for a few seconds. Then grabbed the Symbol from the cleric’s hand and said “Yes. I will bring this message to your brothers”. Then he ended his suffering.
A Patrol passing there saw and carried him back to Silverymoon there he recovered from his terrible wound, but his mind is still slippery sometimes.
When he was back in his feet, there was only one thing in his ming. he went to the Temple of Helm and presented himself to the High cleric. He explained the incident and said he couldnt save the man, so he was offering his service to the temple for the rest of his life.
So he became a cleric of Helm and carried both his holy symbol and his fallen friend’s together.