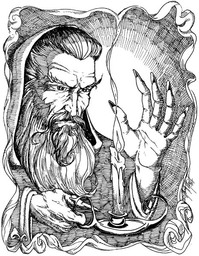 Hello, my name is Richard Booher – also known as the CE DM and the SCE DM. I began playing D&D in 1979 when I received Basic D&D (Holmes edition) for Christmas. I quickly moved on to AD&D (1e) and have stayed with those rules ever since. However, I have some of the 2e core rules and supplements and have integrated some, but not all, of those rules into my game. As Gary Gygax said, “the DM is the final arbiter,” and I have taken that to heart.

I enjoy playing as well as DM-ing, and have played many different characters over the years:

Of some historical interest, perhaps – I was one of the founding members of the Dungeons & Dragons club at Mohave High School, Riviera, AZ, way back in 1981.

I am currently DM-ing a game using the In Search of Adventure modules (B1-9), converted to AD&D rules, but using the well-developed world of Mystara as a setting. I am also playing in the campaign (a DMPC as we are wont to call it when a group needs a little help) a dwarven fighter – my second such character, as I killed my first character in a battle with a giant king…

Additional note: During our last session, I killed my second DMPC. A natural 20 did extra damage and took poor Borin Blackforge to -12 hp in one blow. Ah well. I believe that I have killed off my DMPC every time I have ever attempted to play one!