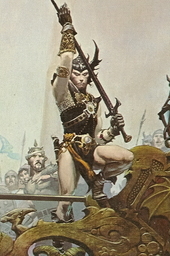 My name is Kerstan and I am a player in Barry’s Forgotten Realms campaign. I also GM and play in another group here in Vegas. I have been playing for years, my first glimpse of DnD being the AD&D 1st Edition PHB, which was very confusing for me, someone who had no experience whatsoever with wargaming. My first character was a Ranger (Aragorn was my favorite fantasy character) and while we struggled with the system, my friends and I had fun. A brief sojourn into the BEC sets helped us get a better grasp of what was going on, and I’ve played all editions of DnD on and off since.

I am an actor and writer here in Las Vegas, have a Theatre degree from Northwestern University (where I went two years before finding out my friends played DnD) and am originally from New York. I was raised on sci-fi and fantasy, and some of my lasting friendships have come from gaming.