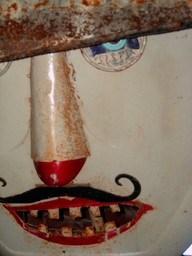 I’ve been playing RPGs since I was 10 years old. It started with a birthday gift Dungeons and Dragons basic set. Included was a folder that combined a DM screen with a binder, containing adventure info, monsters, and treasure. There were little fold up paper creatures and a map. I played my first adventure with my dad, who has never enjoyed most games let alone RPGs. He equates them to monopoly, as envisioned by lawyers and accountants. Later I spent many a long summer night with my cousin, and his friend John playing Dragon Quest, a stripped down version of AD&D. My cleric Knolan, the only good hero in the party, argued constantly for clemency for the villains, and peace within the party. When I returned home and my family moved to a new island, I found some friends in the neighborhood who played using an old beat up copy of the AD&D 2nd editon Player’s Handbook. We eventually got to the point where we were flipping through the Legends and Lore book for demigods and gods to battle, to form our own pantheon.

A few years later, long after my friends had moved or moved on to other things, and the games had dried up I ran into a couple of guys in the game section of the local Waldenbooks. I found out that they had a game going, and were looking for players. The rest is history, as they say. We got along great and I found a new group of friends that gamed with me through high school. People came and went, but the adventures were always fun and fresh. I had many fun characters, and used money from my weekend job to build a large collection of AD&D books. As I got older and met new people we started new games. I got into Vampire: the Masquerade and other White Wolf games like Mage and Aberrant. Eventually I began running my own games and have been doing so since. I spent hours coming up with NPCs, plots and sub-plots. While everyone else in school was doing their things, sports, clubs, drugs, I was building worlds and filling them with characters. I had several successful games, my favorite was one in which the players had characters on both sides of a vampiric shadow war for control of St. Louis, my old home town. The players were sometimes unaware that while completing missions for one sect, they were hampering the mission of their other PCs.

After graduating high school I formed a new group with some friends I had made in my last years there. We got together regularly and played Vampire mostly, but enjoyed a few other games, and once in a while the other guys would run something. I got a job at the Waldenbooks where I had first met my other gamer friends and took over everything Sci-Fi/Fantasy. I worked there for several years enjoying my employee discount and further filling my shelves with RPG books. Eventually I met more players through the bookstore and was persuaded to attend a 3rd edition D&D game. I had previously swore of D&D when I found that they were making a new edition, thus invalidating my entire collection to that point. I was also disappointed that they had never brought back some of my favorite campaigns, like Planescape, Al Quadim, Darksun, and Ravenloft. I met with the group and watched them play and decided I’d join, and so I picked up the three core books. A month or so went by, and I found out they were coming out with 3.5. This further frustrated me, but working at the bookstore I was able to trade my newly purchased 3.0 books for the revised edition.

I gamed with that group for at least two years. Our main GM was a Seargent in the Army. He brought with him great tactical knowledge and an infectious charisma. I would say those were some of my best experiences with 3.5, but eventually I was able to convince the group to let me run a game. I told most of the players that it would be a mafia game using the rules for mortals from the 2nd Edition of Vampire: the Masquarade, and a supplement about the mob that I had picked up recently. By now I was working a second job at a local video store, and had become hooked on the Sopranos. What I didn’t tell the majority of players, and only told my friend the Sgt. and two other players who had been in my previous vampire group a secret, we were going to be playing a Vampire game. The two players would be vampiric Capos, leaders in the organization, working for a Don who had sired one of the characters. My friend the Sgt. would be a ghoul, bound by blood to the family’s Consigliere, a Nosferatu by the name of “No Nose” Panetti. With them in the know, and the other players totally clueless we began the game.

Within a few sessions of begining our Mafia game, we had something special going. There was rumbling in the family. Guys on the lower end, resented their Capo’s hands off approach, letting them take the risk on daytime operations, only to come out at night asking for their cut. Eventually a plan was formed to hire someone from a rival gang to take out their boss, opening up a space for someone else. The assasination attempt seemed like a success, in front of several witnesses the Capo was shot through the heart by someone on the rooftops. The Capo was able to stumble into his car, while the driver tore off to safety. While everyone was congratulating themselves for a hit well done, the Capo was healing himself, drinking blood from the daughter of one of the only mortal capos in the family. When he returned, stating that he had only been wounded, a purge began. The main conspirator was turned over to the boss, but before he could be killed, a group of rival vampires attacked, kidnapping the betrayer, and killing several other members of the gang. War had begun, and suddenly the boss needed more sturdy support. One of the other PCs was Embraced, he ghouled his body guard and now all of the characters were in on the supernatural action.

Meanwhile my friend the Sgt. working as the keeper of his master’s ghoulish hounds was learning more about the monstrous world into which he had been drawn. While working for the boss he had shown much aplomb and had proven himself quite loyal. Unfortunately he was contacted by members of a local werewolf pack that had come to believe he was a lost cub, a werewolf that had never been indoctrinated into their society. They helped him to break the bond that held him to his master’s will, and taught him his true place in the world. He joined the pack, going missing for several games (coinsiding with his vacation). When he returned the family was in trouble. Rival gangs and vampiric savages were tearing into the family’s stranglehold on the St. Louis underworld. In the end, during a climactic battle at the Don’s estate, with Sabbat overrunning the few mortal retainers left to the family, and diablerizing several of the family vampires present, he made his appearance. Now fully capable of changing into the monstrous hybrid war form of his people he destroyed his former master and sowed chaos through the ranks. In the end, when the dust settled only one or two members of the family had survived. They gathered together and one of the capos declared himself the new Don, and began consolidating his power. The werewolves gave him one warning to stay out of the wilds, and walk softly lest he incur their savage wrath.

That game was probably one of my best. It was a great success on the whole, save for one session that involved some changelings, of which I will never be allowed to live down. Later that group fell apart when my friend the Sgt. moved. We played a few games with some other friends, GURPS, and Call of Cthuluh, but none of them really caught my interest as much. Before succumbing to the D&D group, I ran an epic Exalted game that went on for nine months before the group fell apart due to internal strife, and the constant turn over of people leaving the area. This was another of my favorite games, but holds second place due to the fact it was never completed. Eventually I met a nice girl at the bookstore and started dating, I got her and her brother into gaming, and we formed a small group. We got married after 3 years of dating, and will have been married two years this September.

We’ve played in several groups, and I’ve ran several more games, among them Aberrant, D&D 3.5, and a 3.5 version of Gamma World. Right now we have three games going, a 3.5 Steampunk homebrew that has been on hiatus for several months until my brother-in-law gets his new schedule together. We just started a 4th edition game set in the old 2nd editon Planescape setting, and we’ve got the Vampire game that I have posted on this site. I hope to continue gaming all my life, as no other hobby has given me as much enjoyment or outlet for my creativity. I’m not really looking for new players at the moment, but if someone is in the lower Florida Keys and looking for a game, contact me through this site. I can’t gurantee that we’ll have a place for you, but I’m always on the lookout for great players and GMs.

The Keys to Heaven