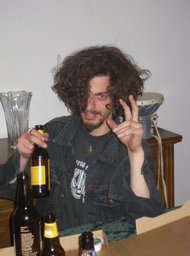 James “Badapple” Huston was born to a poor Lithuanian immigrants in the late 20th century. During childhood he found a great love for klesmer music and quickly became it’s rising new star with his all star band, The Kvetchy Schmucks. He finally hit platinum success with his harrowing album “Flower Children of the Third Reich”, a deep insight into the nature of man that truly explored the known limits of klesmer music.

However success does not always bode well with the artistic mindset. Convinced he had sold out, he had a mental breakdown. During this deep, dark state he experienced what he could only describe as “(sic) transcendental darkness, a state that I saw the universe for what it is. I was forced to stare into the abyss and in sheer horror, I had to laugh. It looked like Paul Rubens, I couldn’t help it. That dude is hilarious!”

Following this breakdown, he decided to reunite his band and record “Franz Kafka’s Playhouse”, the first album to be released by James Badapple & The Kvetching Schmucks in over 6 months. The world waits with bated breath.