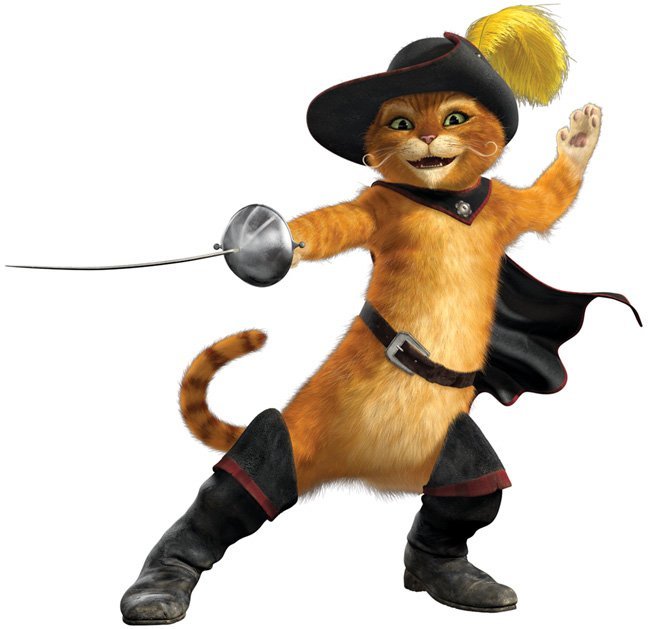 Description:
Damiano is a Catfolk Swashbuckler who stands at 5’ 6” tall, and weighing in at 155 lbs. He has orange and white fur accompanied by black eyes. His clothing and gear are well kept, especially for someone coming from the sea. He wears a black hat with a plush yellow feather. His black boots rise up just below his knees and are adorned with gold filigree. His flowing red cloak will often be brandished as some sort of stage prop as he whooshes it across his body to accompany his movements. He will usually be seen wearing a suit of studded leather armor while carrying a rapier, dagger, buckler, & light crossbow. He also has a second dagger hidden in a wrist sheath on his left arm. Damiano has two bandoliers crossing his torso. There ae a total of sixteen pockets between the two bandoliers, holding a number of small items. Damiano also has a backpack with gear he normally stows below deck. In his spare time, he will often be seen diligently sharpening his weapons.
Ideology:
Damiano has a very happy go lucky personality and believes he is capable of just about anything. This can sometimes get him into trouble, but so far he has been fortunate enough to get himself out. He believes that Besmara is partly responsible for this and that she has been watching over him for a long time. Piracy runs deep in the veins of Damiano and he is not afraid to do what is necessary to get ahead in life. However, he is not a cut throat assassin and is certainly capable of mercy.
Background:
Damiano’s Great Granfather was an infamous free captain “merchant” who spent his time trading the goods he had plundered. My mother died when I was young, which forced my father to take me on his exploits. My father tried to pursue a similar path as my Great Grandfather, but fell victim to a horrible storm. Somehow, perhaps the blessings of Besmara, Damiano survived and was rescued by another free captain. Damiano was only thirteen. He knew of my Great Grandfather and decided to spare my life. Damiano earned his keep helping with anything he could, but as much time as possible educating himself in the way of swordplay. He was a natural, and it made it easy for the captain to keep Damiano around as he was an obvious asset to his crew. We recently docked in Port Peril after a successful expedition into the shackles. Damiano and several other members of the crew decided they would go to the Formidable Maid to celebrate…