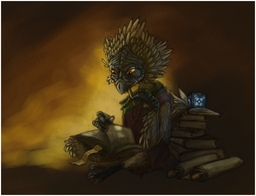 Hello all. I have been playing role playing games all thanks to Jon in my 7th grade art class who brought an AD&D 2nd edition Monstrous Manual to read during class (instead of doing his work). Since I liked monster movies (Sinbad, Clash of the Titans, Jason and the Argonauts, etc) I was fascinated by this book. Since my mom worked for the library I had her barrow the book for me, and I ended up getting it from the library a second time. It was upon barrowing it from the library that I learned that this book was part of a game, so that’s why the AD&D 2nd edition Started Set is tied with the Monstrous Manual for the first role-playing products I bought. I played it with my cousins during the summer of 1998, when I had just turned 14. Since then, I have been a GM and a player (more often a player). Now the types of games that I like:
1) I like D&D 3.5 and the Pathfinder system, though I like the latter more.
2) I like games that have more open-ended character development. Instead of gaining levels with set benefits, I would prefer to build my character with a pool of points that I can use to customize him / her. I still play games that have a level system but as long as the leveling up process is not too rigid I can deal with it.
3) I like games that have a mechanic that fits well with what it’s supposed to do. Trail of Cthullu, for example.
4) I don’t like playing White Wolf (so far, though I am still interested in trying some that I haven’t yet played). I like reading the books, but it seems a bit clunky implementing the rules.
5) There are some games that I have only played a little bit of and would like to play more of. BESM, the new percentile Warhammer 40K, Mutants and Masterminds, Eclipse Phase, and Shadowrun 20th anniversary edition.
6) I like the Star Wars Saga Edition (with which I just recently finished running a game for). I don’t like the way the organized the information, nor do I like the redundancy (especially in the last two books, Galaxy of Intrigue and the Unknown Regions). For example, there are two talents and one feat that allows you to use improvised weapons without penalty, but the feat is the best of the three because it also gives you a bonus (when really talents are supposed to be more useful).
7) There are some systems that I would like to try but haven’t had the chance to. The Dresden Files, Legends of Anglerre (which would have a magic the gathering theme if I GM it one of these days), Starblazers, Cyberpunk (which I have no books for), Fading Suns (which I know little about but it sounds fun), D&D 4th edition (I know there are lots of criticisms, but I still want to give it a fair chance), Mecha Vs. Kaiju, and there might be a few I can’t think of.

_Darth Vangoff is my account name, but it was also the name of an NPC in a Star Wars game I ran (see Fellowship of the Force in the “my campaigns” tab). Darth Vangoff was a mrlssi sith. He was one of my favorite NPCs and the PCs generally consider the fight with him to be one of the best, or at least one of the most entertaining.

chazbotic updated the character The Great and Powerful Trixie in the campaign Tanhauser Gate
July 29, 2012 16:05

chazbotic created a new character The Great and Powerful Trixie in the campaign Tanhauser Gate
July 08, 2012 14:12