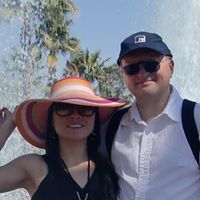 First RPGed in the 1970s, when AD&D was brand new. Got into miniatures then too. GMed a several year game in college of Traveller (still have all the original books). Got into paper/cardboard counter wargames – collected but did little playing, other than a little during my PhD work. In 2006, decided I would get back into wargaming with real people, did the research to find out what the most people were playing, and picked up GW Warhammer 40K and Fantasy. Have close to a 1000 painted figures of various armies, mostly done by me. Last year though decided to get back onto RPG and was fascinated by WFRP3, because of the dice mechanic. Got into a RPG group (but they don’t do WFRP) so I sought out an online group. No luck for awhile, but after getting Fantasy Grounds II, I advertised to start my own group. After months of no response, Paul Noel responded and the rest is history. We’ve been playing since spring of 2014 with both Paul and I GMing.

WFRP3 - Darkness and Light in the Empire

WFRP3 - The Eye of the Storm