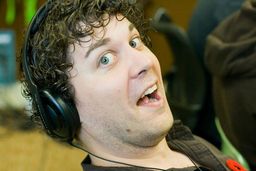 D&D is habit I’ve been unable to kick.
Now on the verge of 30-years-young, my passion for the game is as strong as ever.

I started my love affair with Dungeons & Dragons when I was in the 6th grade.
My brother is a bit older than I am, and my parents ‘volun-told’ him to include me in his game.
I quickly grew to love the immersive element to the game. The precise moment where I had become a lifer nerd was when my human mage stopped the party from tearing itself apart over an artifact by webbing everyone and arbitrating the argument.

In my 18-or-so years in the hobby, I’ve spent most of my time in the DM chair, but I warmly welcome the chance to bring a character concept to life as a PC. I love the interactive storytelling dimension to D&D, and nothing else I’ve found can scratch that itch. As a DM, its great when the PC’s take an unexpected turn, reveal an unseen dimension of their characters, or react in unpredictable ways. Sometimes it’s tricky to keep things on the rails, to balance the story that you’ve written and keep the focus on character development, but its a challenge thats really worth it.

My preferred game engine is Pathfinder. I find it to be of the 3.5 style that I enjoyed, without too many published texts that didn’t work well together. There’s a few mis-steps in Pathfinder, but nothing that a couple of house rules can’t straighten out.

I’m currently running a campaign that will reintroduce PCs, NPCs, and villains from my old D&D group’s most iconic campaign.

JadePhoenixMage updated the wiki page Heroes and Villains of the Realms
January 31, 2015 20:02

JadePhoenixMage created the wiki page Heroes and Villains of the Realms
January 31, 2015 19:51