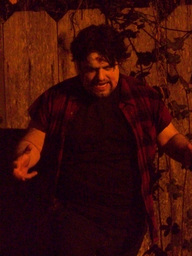 I live in Salinas, California. I’m open to trying just about any game that might fall across my face, but I prefer cinematic systems where the dice rolling is fast and the results are simplified enough so the story narrative moves along at a decent pace. I tend to run games in the same way, with more of an emphasis on the story and character development rather than just crunching numbers and throwing monsters through the woodchipper. My characters tend to have a martyr mentality. I’m almost always willing to be the guy that makes the stupid decision to open the book, cross the threshold, or carelessly toss something into the pit of evil darkness yawning open a few feet away. My own games tend toward the heroic on smaller scales, saving the village or recovering the lost items or ending the deadly curse.

My current favorite system is the Savage Worlds’ core game engine. I also like 7th Sea, L5R, and various other games I never get to play for lack of time and people. If you’re interested in gaming with me or my wife (bane blue on here), send us a mail and we can hopefully get together.

Rise of the Runelords VA