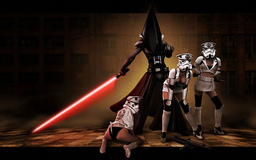 I started out as a GM running West End Games Star Wars RPG. I ran a short but successful semester long campaign set in the time frame between A New Hope and Empire. Since then Star Wars has been one of my all time favorite games to run and I’ve gone back to it time and again. Dark Corners of the Galaxy will probably be my longest running SW campaign if I can actually get it up and going. I plan on making it as epic as possible, and I mean that in the literal sense of the word, not in the forum/blog sense of the word.

In the past I’ve also run a Final Fantasy campaign using the Big Eyes Small Mouth system which ran for about 2 years and was far more popular and successful than I had ever anticipated. It was known as Final Fantasy : The Musical! It was a lot of fun as PCs and NPCs would occasionally break out into song, for which we just used CDs as no one was expected to actually sing.

A second campaign which lasted quite a few months was loosely based on The Books of Swords and was also run with Big Eyes Small Mouth. Being a huge video game nerd it was also liberally sprinkled with vg character, references and plot lines.

The last campaign I ran was called Survival Hearts. It was a survival horror game run with All Flesh Must Be Eaten and the PCs traveled to various survival horror worlds sort of like Kingdom Hearts. However rather than finding key holes and princesses they had to eat the hearts of particularly powerful entities to travel from one world to the next in an effort to stop Ydra Evgra, the Lord of the Dead, from unleashing a zombie apocalypse across all plains of existence.

Dark Corners of the Galaxy