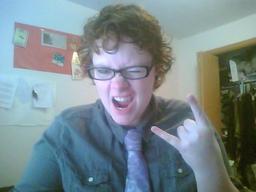 ((A diner, mid-morning. A waitress missing her right molars pours coffee into an empty mug, then proffers you some. You order your drink of choice. Sun comes in through the windows, spliced by the blinds to cast horizontal lines across the table and its occupants.))

My first experience with RolePlaying? ((The woman takes a sip of the coffee, her lips pursing just slightly at the acrid taste.)) I guess I was 15 or 16 at the time. ((She chuckles)) Seems longer ago than that.

It was my three brothers and I. They’re all here, you know. ((she gestures to the Obsidian Portal territory))…Somewhere.

Hm? Oh, they game, they DM. We’re all growing up, you know, and any chance to keep in touch needs to be considered.

Anyway, they were, you know, kind of bringing me into the fold. ((She reaches for the coffee again. At this angle, you can see more of the octopus tattoo in her armpit, tentacles reaching out, spanning back, arm, and torso, mostly obscured by her tank top.)) I mean, you have to understand. I was not cool enough to hang out with them in any form until I was 14 or so. I was lucky to be in the same room with them.

It was a Star Wars D20 game. I remember that. It had really just come out and I think they were just so excited to break it in that when I asked to play, they were willing to cut me that slack, because they’d be learning it, too.

I’m pretty sure I was a Twilek… might’ve been a human, though. I remember I wasn’t much to get excited over. A rogue type. Some woman running away from home for a really flimsy reason, you know? A Mary Sue that I was embarrassed to call a Mary Sue.

I think we only played a few sessions, but that first one they were being super patient with me. I was looking for Spice, you know, and some guy was going to give me a ride somewhere on a speeder bike. ((She sets down the coffee, her mouth pulling into a side-long grin that shows her teeth.)) I popped him right in the back of the head. First session and a murderer.

You know that thing people say about prison? Your first day you gotta beat someone up to show you can’t be messed with? I think it was like that. I wanted so badly to be cool that I just killed some innocent NPC to show my brothers I was capable of it. They laughed their asses off and gave me a Dark Side Point and, I think, some respect.

((She leans back, still smiling at the memory)) I didn’t play again with them for a few months when we started up a DnD game, but, man. That still just cracks me up.

o_Zanzibar_o updated the character Jacob "Manytongues" Windsong in the campaign The Devil's Den
May 30, 2018 04:33

o_Zanzibar_o created a new character Jacob "Manytongues" Windsong in the campaign The Devil's Den
May 30, 2018 01:41

darkmonkey13 updated the character Henry "Give Their Due" Proudfoot in the campaign The Devil's Den
May 28, 2018 15:22

AndySimmons updated the character Bridgette Floros in the campaign The Devil's Den
May 27, 2018 05:58

AndySimmons updated the wiki page Bridgette Floros' Journal in the campaign The Devil's Den
May 24, 2018 01:36

o_Zanzibar_o updated the character Constance Arden (Willowwood) in the campaign The Devil's Den
May 19, 2018 02:54

o_Zanzibar_o created a new character Constance Arden (Willowwood) in the campaign The Devil's Den
May 19, 2018 02:53