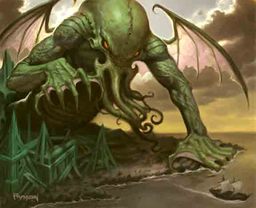 Popped his Cherry: Summer 1996. There was a casual encounter back in about 1989 with a DnD kit, but I didn’t really go all the way until Summer 1992. I remember it well. A friend of mine had introduced me to a card game called Rage that featured werewolves battling one another for inter-pack supremacy. The game was neat, but far cooler was this Roleplaying Game that it was associated with: Werewolf: the Apocalypse. Next thing I knew I was behind the ears of a Get of Fenris Metis named Hellboy Kills the Wyrm (dude, I was 16, leave it alone). I never looked back.

GAMES PLAYED: (in no particular order)

Defining Gaming Moments:
(Open for other gamers to modify)

Werewolf the Apocalypse: having chased a fomori hunter to his safehouse in the Sears Tower, a fight erupts in an unassuming cubicle farm. A ficus is thrown, a kinfolk is thrown, a window is blasted out and both the fomor and myself dive out the window, engaging in a high speed, falling chase towards the concrete. Death is only averted by a quick step-sideways into the umbra, where pattern webs are used to break my descent.

Street Fighter: captured by terrifying fiends, my acro-ninja finds himself chained to a wall and develops a love of frilly dresses and high pitched laughter.

L5R: Bayushi Bakuryu, having been drawn into the Seven Days of Thunder, finds himself face to face with the fel godling, Fu Leng. Having trained his entire life to thwart Fu Leng’s attempts to seize control of the Empire, Bakuryu draws a jade kunai and stabs the God of Death in the thigh. Though the kunai barely breaks Fu Leng’s skin, it unleashes a wave of pure energy so vile that Bakuryu is annihilated completely.

Werewolf the Apocalypse: Zylo Mandrake, a mere Fostern of the Glass Walkers has been working overtime trying to reestablish a presence of the wholly nascent GW Tribe in the Caern of the Silver Moon, the IC W:tA setting of the official White-Wolf html chatrooms. Naturally he comes into conflict with the substantially more experienced, substantially more respected, and substantially more established Red Talon Elder. After weeks of bickering, their confrontation becomes physical. In the middle of a Moot, Zylo gets into the face of his Lupine foe, and when the Talon tries to shove Zylo down, Zylo shoves back… with The Falling Touch. An excellent role later, and the Elder Werewolf is flatbacked in front of his peers.

swforce1 updated the adventure log post Welcome to your campaign! in the campaign Iron Kingdoms - Mercs for Hire
May 06, 2021 15:31

swforce1 created the wiki page Holmfirth Garrison in the campaign Iron Kingdoms - Mercs for Hire
May 06, 2021 15:25

swforce1 updated the adventure log post Welcome to your campaign! in the campaign Iron Kingdoms - Mercs for Hire
May 06, 2021 14:59