RichardFox doesn't currently have any campaigns. 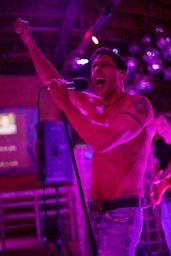 Born in El Paso Texas, Richard Everett Fox honed his earliest skills through self study of the old masters’ works while emulating his favorite examples of their craft. His later teachers would comment on how remarkably far he had come through mere intuition, as he began his tutelage under them in the more rigorous and refined aspects of painting.

As a trained classical artist in the old world style, Richard continues to maintain the integrity of its traditions as passed down by his master to him from a lineage traceable to the great Bouguereau. Furthering his innate talent requires him to continually study and improve his knowledge of paint and composition. Technical skill is crucial when portraying the real nature of being; such as a figure, landscape, or a portrait, in this classically realistic painting style.

Equally as important is the subject matter itself. It is through this chosen subject matter that the artist fulfills his ultimate desire to communicate with his audience. As can be seen from the variety of subjects Richard endeavors to portray, from the portraits of prominent figures to the symbolic tableaus of myth and legend, he recognizes that classical art has an important place in our society as a window into some of our earliest foundational thoughts and ideals. It is through allegory and symbolism that Richard often draws the clearest vision for his work.

While his classicism emphasizes continuity, Richard understands that art and its audience changes. In a technical sense he knows that art is an effort to recreate a true understanding of the moment depicted, both visually and psychologically. Visually, he tries to depict action and purpose; emotionally, he tries to expand or intensify consciousness. But in a world of stunningly fast changes, both socially and spiritually, his classical ideal is an effort to create works dependent upon analysis, reflection, and meaningful thought.

Richard Fox has been working for more than 20 years in Texas and his art adorns many of its finest homes and buildings. The pieces seen within this site are a reflection of merely a few of the works, both public and private, that he has become known for. In his ongoing efforts to expand his knowledge and skill, he will continue to explore his artistic horizons with many more works in the coming years.