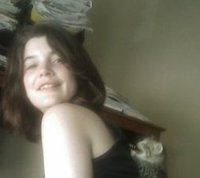 Let’s see…I’ve been a tabletop gamer on and off for 11 years, give or take. I prefer the White Wolf games generally, but a good GM is really key for me, the game mechanic is less important than the story I’m involved in. I like games that allow me to really get into the meat of roleplay, to take on a new identity and do fun off-the-wall type stuff. In Vampire I love to play clans outside of the norm like Giovanni, Malkavians, and such. For some reason I really enjoy playing small characters that are seriously bad ass with blades. Something about the small dog thing, a little frame packing a whole lot of punch. I’m less interested in fighting than in acting, though, and any game that gives me the opportunity to really stretch my brain is preferable. I dislike math so game mechanics that allow me to do as little math as possible makes me happy.

I’m a poet, and therefore I like to write character backgrounds, and I like to make them florid with descriptions. I spend a lot of time creating characters and so when I lose one I tend to get upset, though not with my GM or the other players, more just with my own bad decision making, but I get over it quickly and get excited about getting to make a new character and do something completely different.

Marching_Hare created the wiki page The Book of Specifications in the campaign Heddleway
July 07, 2018 05:25

Marching_Hare created the wiki page The Poetess in the campaign Heddleway
July 07, 2018 05:18