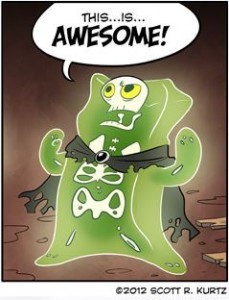 I have been playing role playing games for over of half of my life and have been running games for nearly that long as well (going on seventeen years). I majored in film, English, and theology in college and have only being a well rounded individual to show for it (which is not a bad thing in the grand scheme of things).

I love RPGs because I always seem to make friends when playing or running games. It is one of the most diverse forms of self-expression I have ever seen, and has the most immediate result. They also let me tell a story with a message that is amazingly organic and on a level beyond that of film, books, or music. It uses all of these things, and lets others be more than a mere observer… We can be participants in the stories. It’s like this crazy, mechanical, living jazz…. Unfolding right in front of me. What is not to like about that?

A little bit more about me? I love Doctor Who, Star Wars, and steampunk. I’ve never heard a type of music I did not like on some level, and my tastes always seem to grow a bit more with each new song I hear. Favorite movie of all time? Has to be a tie between Jaws and E.T.: The Extra Terrestrial…. That little bugger from Saturn always chokes me up.

Anything else you want to know about me? Read my campaign’s as they grow or just ask.

The Antar Series - Book IV: The Winds of Fire & Magic