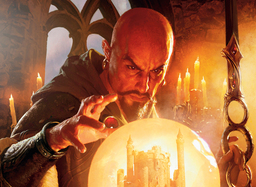 I prefer a story driven game where the rules take a back seat to everyone at the table enjoying the game; players and GM alike. Rules have their place but shouldn’t stifle the fun or the story they’re only there to facilitate play. I’d rather play in a game where you have to think through a situation rather than just slaying hordes and looting the corpse(although a well placed bloodbath is always fun so long as it isn’t the entire campaign). Roleplay is more important than dice rolling. I fully believe you get out of the game what you are willing to put into the game so everyone should put at least some effort into it, otherwise why play?

Dawn of the Last Reign

Remnants of a Lost Age

MatthewColeman updated the character Thomas Burton in the campaign The Fall
October 19, 2014 05:58

MatthewColeman created a new character Thomas Burton in the campaign The Fall
October 19, 2014 05:57