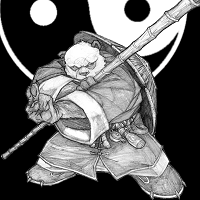 I was introduced to role playing games when I was 15 years old in high school, and I’ve been playing on and off when I can ever since. I typically game about once or twice a month. I don’t have much experience with gaming over the internet (except in various MMORPG’s, if they can count). My favorite genre game/run is Super Heroic, followed by Science Fiction, then Fantasy. I’ve dabbled with Horror and enjoy putting the lighter elements of the genre into the games I run or play.

Despite all its flaws I’m a big fan of the Palladium system and all its games. I also enjoy Call of Cthulhu (Chaosism fifth edition), Dresden Files (FATE 3.0), Mutants and Masterminds second edition, Vampire the Masquerade (White Wolf third edition), Shadowrun fourth edition, and Dungeons & Dragons second and third editions. I own the books for and have dabbled with Little Fears, BESM first and second editions, Serenity, Polaris and some others but those books (unfortunately) hardly get off the shelf these days.

The Dead and the Damned

The Dresden Files - The Hammer Falls

GamingMegaverse favorited In Darkness in the campaign In Darkness
January 08, 2022 07:53