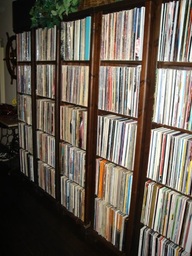 I started role-playing in 1979, yes I am that old, with Traveler. I still remember my first character, Rod Rambler. I played Traveler & D&D for a while, but became addicted when Teenage Mutant Ninja Turtles came out in 1985. It was dark, like the comic, and a joy to play. I began to GM that year, and ran some sort of Palladium game almost continuously until 5 years ago.

In March 2011 some friends and I decided to start playing again over video conferencing… thus A God…Rebuilt came to fruition.

This game was like most of my games- a detailed outline and beginning, with the players left to their free will to go from there. It finished in December 2017.

After 2 years of playing a Heroes game- Heroes of the Century we are now playing Savage Rifts!

Yes, my profile picture is my wall of records- there are more in another room- I have a vinyl record addiction.

Please also feel free to send me a PM about any formatting or questions- I am always happy to help!

My favorite campaigns, the ones I draw inspiration from, are below in no particular order. Each banner is clickable, and will send you to their site.